Assembly District Delegates (ADD) to  the Democratic State Central Committee (DSCC) aka California Democratic Party aka CADEM are responsible for planning and attending informational meetings throughout their CDP Region and working with other DSCC Delegates throughout California to represent their community.

AD Delegates are elected by voters (to participate in the ADEM you MUST be a registered Democrat in that Assembly District).

AD Delegates vote on behalf of the community they represent at CDP Regional Meetings, the California Democratic Party Convention, and those who are also elected to serve as an Executive Board member are responsible for voting and representing their community at the semi-annual E-Board meetings.

Please click here to apply for ADD and if you wish to also run for the EBoard.

Note: If you wish to run for the EBoard position you must specify on your application to run.

The deadline to pre-register for a vote by mail ballot is January 11, 2021

Note: If you are running as a candidate your application to run also allows you to pre-register to vote. You do not need to complete this pre-registration form if you have applied to run.

Other than Self-Identified Female

Other than Self-Identified Female

STATE OF CALIFORNIA CITIZENS REDISTRICTING COMMISSION FINAL REPORT ON 2011 REDISTRICTING AUGUST 15, 2011 (pages 27, 29): For Northern California and the mountainous Sierra foothills regions, the Commission responded to public testimony asking us to separate more sparsely populated, rural regions from densely populated, urban areas. The 19 counties north of Sacramento span approximately a third of California’s land, yet make up fewer than 5% of its residents, for a population density of 35 persons/square mile. In comparison, San Francisco has a population density of over 17,000 persons/square mile.  […] For the San Joaquin Valley and Central Coast regions, the Commission responded to public testimony asking us to respect the mountain range in between the two regions, with only one exception (the Senate district drawn to comply with the Section 5 benchmarks for Merced and Monterey Counties, which connected inland Merced County with the eastern part of Monterey County and San Benito County). The Tehachapi Mountains in the south also separate the Central Valley from Los Angeles County, and the Commission was able to honor this major boundary between regions. There was conflicting testimony about separating the communities of the Central Valley floor with that of the foothills and Sierras to the east, so the Commission further struck a balance maintaining the separations and connections between the Valley floor and these communities. Issues of water use, agriculture and urban economies, transportation routes, and environmental concerns framed much of the public testimony.  […] AD 5 includes the whole counties of Madera, Mariposa, Mono, Tuolumne, Calaveras, Alpine, Amador, western El Dorado County and a small portion of Placer County. This is a “foothill district” that keeps together communities from South Lake Tahoe through the foothills and Sierra Nevada Mountains including the El Dorado National Forest, Stanislaus National Forest, Mt. Whitney, and Mammoth Lakes. It reflects shared interests reflected in public testimony around issues such as weather, watershed, fire and recreation united around the transportation corridor of Highway 49 which runs north and south along the Sierra foothills. El Dorado County is split above Folsom Lake to distinguish the communities in the foothills from the greater Sacramento area. 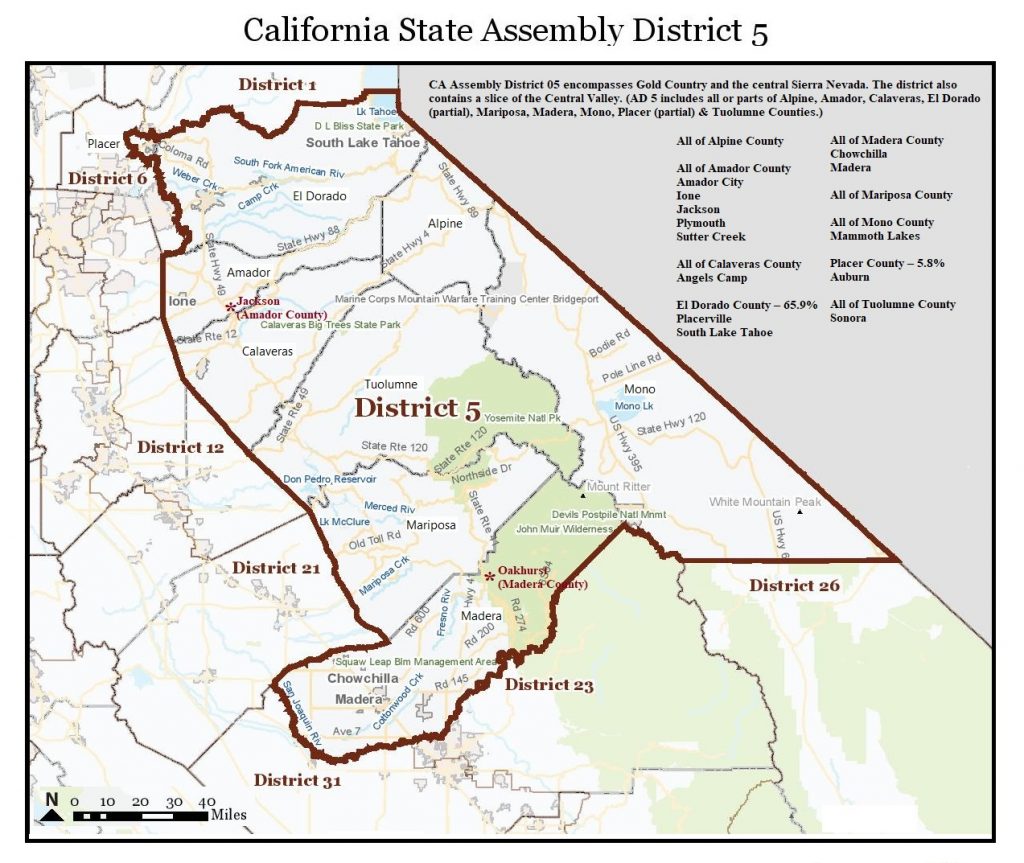