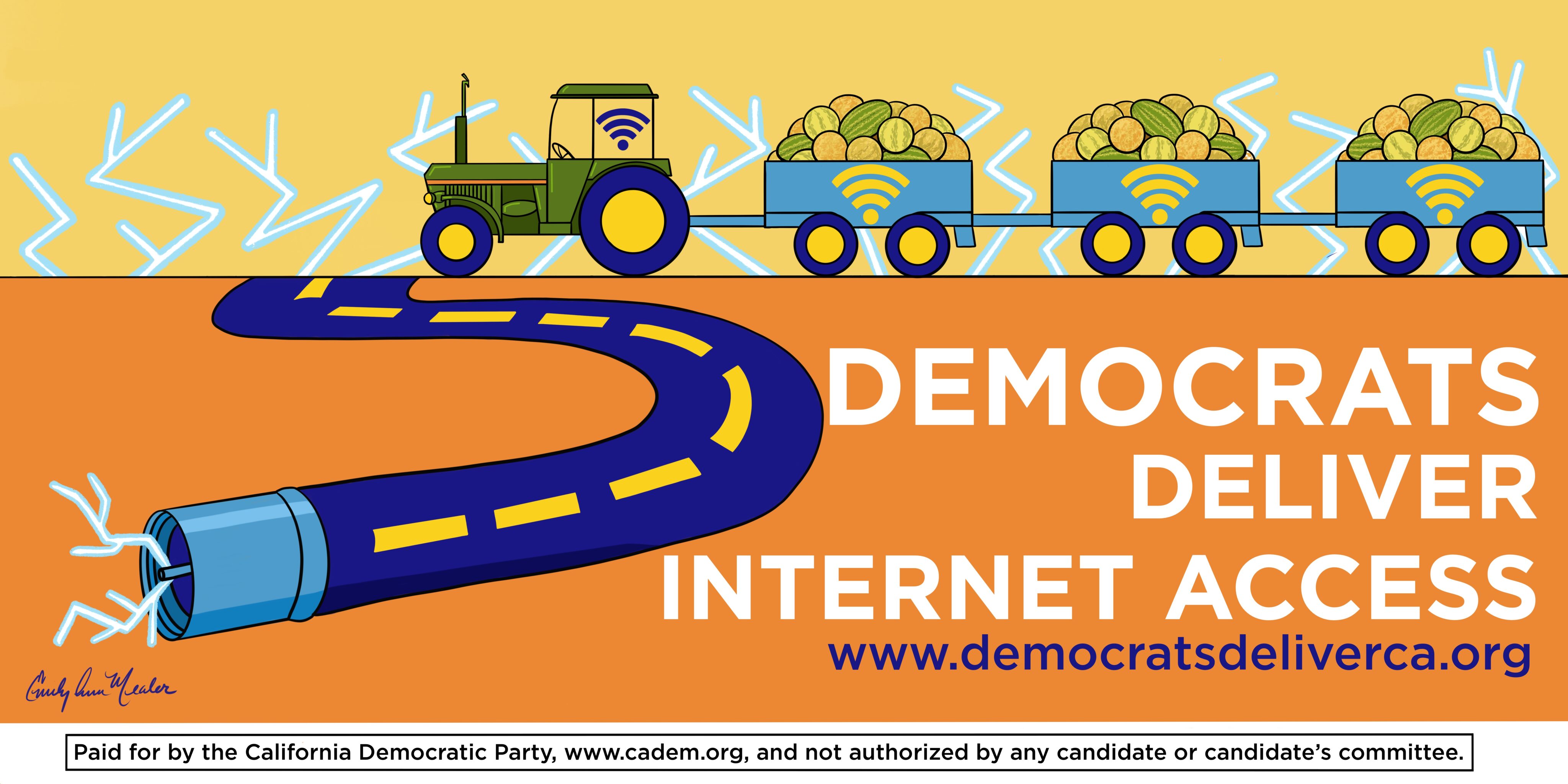 (Fresno, California) – The California Democratic Party, the nation’s largest state Democratic Party representing 10 million Democrats, is kicking off a pilot Rural Broadband Education Billboard Campaign in the Central Valley. The billboards, which launch on Monday June 13th until November 2022, will rotate among six locations from Los Baňos to San Joaquin.

“The California Democratic Party, in partnership with the CADEM Rural Caucus, is proud of the grassroots work taking place in rural regions through this campaign,” said CADEM Chair Rusty Hicks. “Led by activists in the Central Valley, this program aims to reach thousands of people across rural regions and fight back on Republican-led misinformation efforts,” stated Hicks.

The message “Democrats Deliver”/ “El Partido Demócrata Cumple”, promotes Democratic-led accomplishments. The goal is to provide the truth on how Democrats are delivering and improving people’s lives through the investments like the $6 billion which derived from the America Cares Act, signed by President Biden, which the Governor and the State Legislature’s Democratic supermajority dedicated to providing access to the internet for all.

This campaign is distinctive as it does not focus on a candidate but the Democratic brand. It also is not geared to a specific election cycle, but as a year-round commitment.

The long-range strategy is to put up billboards up and down the state along the state highways where the fiber is going to be laid, beginning with the pilot program in the western San Joaquin Valley (the new CD 13), representing one of the 18 initial broadband projects named by Governor Newsom last November.

“Real efforts to close the digital divide is an extraordinary achievement. When California Democrats say internet access for all – we mean for all, starting with some of our most rural communities, places like Los Baňos, a small town in the western San Joaquin Valley, where having access to the Internet means telemedicine. It means kids being able to do their homework. It means curtailing some commuting. And creating local opportunities”, stated Joy Sterling, Chair of the CADEM Rural Caucus.

The artwork was chosen by the Fresno Art Council, who put out a “call to artists” on their website asking for submissions. The winning artist, Fresno based graphic designer Emily Ann Mealer, was awarded $5000 for four designs – in Spanish and in English.

The billboards are tied to a website: DemocratsDeliverCa.org, which provides information on the location and timeline for building out the infrastructure and how to access government programs that help pay for internet service.